Parts of the occupation are located on the planned route of the A49 in Dannenröder forest between the towns of Lehrbach and Dannenrod (see map below).

A description of how to get there by train and bicycle can be found below.

If you’d like to come by and need infomartion about the current situation, you are welcome to contact us on the forestphone +491636282203

There is a vigil at the sports field in Dannenrod  mahnwache-dannenröderforst.de. There you will find more information about the paths and the current situation: 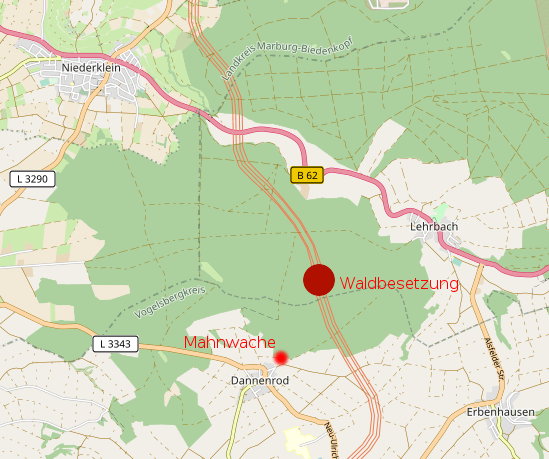 The Homberg (Ohm)-Dannenrod bus stop is two minutes’ walk from the Mahnwache andanother bus stop Kirtorf-Lehrbach Ortsmitte (town centre) is located on the north-eastern side of the forest.

Directions for train and bicycle

Follow the bicycle path in direction Lehrbach. Shortly before Niederklein you turn left on a gravel road in between fields (there is a sign showing a direction for the bike path). After few hundred meters turn right and cross the main road. Directly after you cross the road, turn left and follow the road for about 50 meters across the bridge and after that turn right into the forest and 50 meters later turn left. Follow this path which is going sometimes through the forest and sometimes on a meadow next to it until you reach again a bigger road, where you should see a big farmhouse in front of you. In this moment leave the bicycle trail and turn left up to the forest. In 200 meters you get to crossroad where you turn left. Continue forward until you reach the crossroad where this road ends. There you turn left and then second road going right. After few hundred meters you should see the occupation on your right side.

In Niederklein you will find a path to the field path, which then goes straight through the forest as a forest path (see detailed map of Niederklein below). If you follow this forest road, you’ll come across a country road, on which you turn left again and which leads to Dannenrod. In Dannenrod turn left again up to the sports field and the edge of the forest. The journey approx. takes between 30 and 40 minutes. 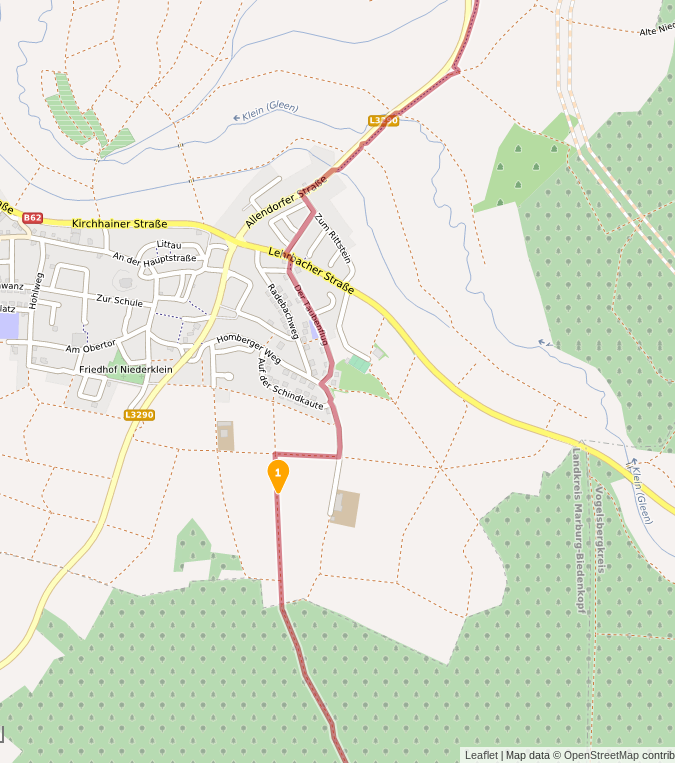