Where do we go from here? – A report from the Danni protest camp

Posted on 9. January 2021 by dannenroederwald 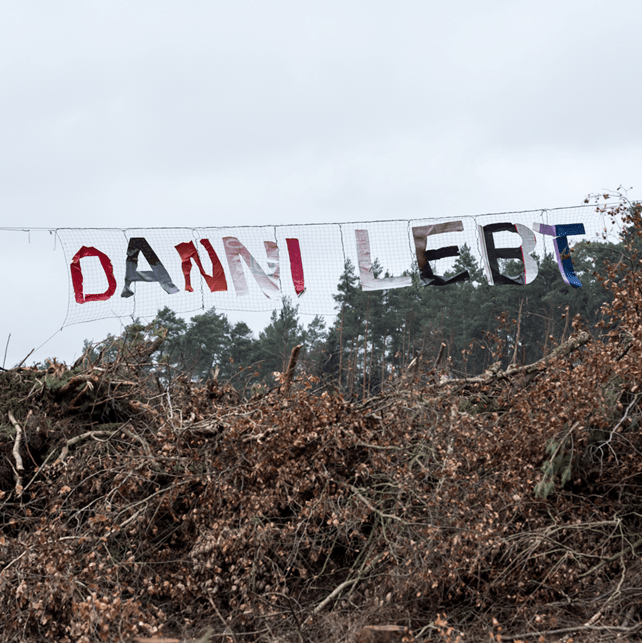 Disclaimer: This article was written by a group of people and does not represent the whole occupation. There is no authorised group and no official body that could decide upon an ‘official’ group statement for the occupation. The people in the occupation and in their immediate environment have diverse and controversial opinions. This diversity of different stances is therefore not censored here, but differing opinions can be equally valid and have an equal right to be seen and heard. No text will speak for the whole occupation or is necessarily approved by everyone participating in the occupation.

The fight for the Danni is far from over. It is true that we – by this I mean all living organisms, human and non-human animals – have suffered heavy defeats through the loss of various habitats, and many may still not be aware of the consequences for society. But more and more people are becoming aware of the need for a change in our mobility and an ecological way of life.

We may have lost large parts of the forest during the last year, but we have also gained a lot. A deeper understanding of our nature, a sense of belonging, empowerment, a broader understanding of society and being understood by the community. Furthermore, we had to realize that our state does not take climate protection seriously enough and portrays sustainable climate activism that tries to stop the massive destruction of nature as a criminal act.

Where do we go from here? – It is difficult to answer this question for such a diverse and sustainable movement. So many things are being planned, so many ideas are being discussed, so many people from different backgrounds are coming together, united by the desire for an alternative way of life contrary to the current exploitative society.

Due to the decentralised organisation and autonomous way of life of the movement, it is possible for everyone, locally and at home, to support and advance the protest in individual ways. Every day I hear about new initiatives, ideas and working groups, about photographers who work on and publish photo books to document the Danni, about people who take the protest to their families or who create a Danni podcast (‘Voices from the Forest’). People who dream of a travelling circus (‘Danni Musical’), who start a reading circle to educate themselves autonomously, who spend more time in nature now, find their purpose in their own garden or who mobilise their local group, expand their political education work and support environmental actions and occupations across Europe. The list could go on forever. The creative actions and forms of protest that were lived and tested in the Dannenröder Forest now offer us the opportunity to reflect on ourselves and the protest, to maintain and pass on what works, to improve what is outdated and to try out something entirely new.

Contrary to what is portrayed in the mass media, neither the clearing nor the resistance is over. The struggle for climate justice continues. Here and worldwide. The trees on the route through the Dannenröder forest have been felled, but in order to extend the A49, the tree stumps still have to be torn out of the ground, further construction steps have to be taken and the road has to be asphalted. For the Bechstein’s bat living in the forest and also for the protest camp, the people and the associated structures, the forest is still a home.

Until the end of the clearing season end of February, the camp is still officially registered and the structures, i.e. Awareness, Sanis, KüFa, Infopoint and various other task forces and projects remain in place. The guesthouse provided by local residents will continue to be used as a structure and is being transformed into a regeneration centre and research institute for everyone to use. In addition, work is being done on the possibility of extending or even make the protest camp permanent through 2021. The highway is far from being a reality. It is not built yet and our protest stands strong!

In addition, mobile structures and digital working groups are being created here and in many other cities. For example, Lantifa (Local Area Network Infrastructure Technology For All) is working on a mobile support structure for occupations, and Santifa is working on a paramedic network for demonstrations and protests that will provide activists with medical and psychological support. The political education project ‘Danni Bildungszweige‘ (‘Educational Branches‘) is currently planning, among many other projects, a ten-day climate camp in April with a focus on change in mobility and transportation. There is also a working group organising themed weekends, the Short.cut working group setting up an occupation networking structure, a working group on ecological construction monitoring and digital research parties to compile important information. In order to process the experiences from the Danni, some of the educational branches have also decided to carry on the protest in the Danni through art, music, theatre, story collections or mobile exhibitions.

Legally, the construction of the A49 can probably only be stopped by the argument of drinking water pollution. This risk, just like the destruction of trees and tree houses, is simply accepted by politicians. The pillars of the highway bridge that is to cross the Gleental are located exactly between several wells from which half a million people get their drinking water. One of these wells is even to be shut down completely. However, the bridge has not yet been built and cannot be built if the area is not cleared by the end of the clearing season. 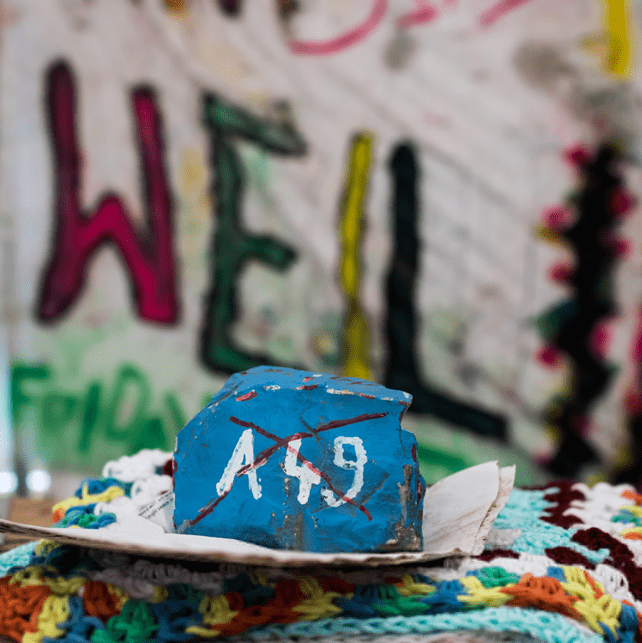 The protest in Dannenröder Wald stands for a traffic and mobility transition. This goal has not yet been achieved. At the turn of the year, for example, the biggest infrastructure reform for decades in Germany, which according to the federal government is supposed to lead to faster, more efficient and more economical planning, approval and execution of construction projects, came into force. 136 construction projects are currently being managed by DEGES, and a further 4500 construction projects are now to be managed by Autobahn GmbH. A full 1.8 billion euros from the federal budget will be available for this in 2021.

What does that mean for us?

The Federal Highway Authority (FBA) will deal with sovereign law issues for the planning and construction of the 800 kilometres of motorways still planned. In line with the car lobby, transportation minister Andreas Scheuer guarantees the expansion of efficient motorways, which – in his opinion – are also expected by the citizens.

The fact that many more kilometres of motorway are to be built in the country with the highest density of motorways in the world is not the only cause for concern. With the shift of state competencies for transportation planning to the federal level, problems of constitutional law could also arise and the Autobahn GmbH, which was conceived as federal property, could be transformed into a privatised public limited company. As a consequence, the destruction of the environment in favour of fossil mobility on the one hand and the shifting of general interests into private hands on the other hand are to be expected.

For us, a mobility transition does not mean giving up our living space for outdated, environmentally harmful construction projects. A mobility transition means designing transport and mobility in such a way that they are sustainable, environmentally friendly and equally accessible and affordable for everyone. This is why fossil-fuelled individual transport, which in the long term does us more harm than good, must be replaced by new transport concepts. In order to give form to these thoughts, bicycle tours to various occupations in Germany are planned as one of many forms of action. More and more places of protest are emerging that are happy to receive support and are building platforms and structures in solidarity with Danni, creating spaces of sustainable and lively community and standing together with us against the capitalist exploitation of nature.

People are already cycling to other occupations, for example in Flensburg, Hamburg and Osterholz. But climate change doesn‘t acknowledge borders – there are construction projects destroying landscapes and nature in other countries too, and resistance movements fighting against them. That is why we strive to network and connect internationally. For example, we are in exchange with the ZAD (Zone a Defendre) de la Colline in Switzerland, which opposes the destructive expansion of the imperialist cement giant Lafarge Holcim and has created a place that defends biodiversity locally. Information about the occupation and ways to support it materially can be found here:

Change lives from sharing experiences and skills. Therefore: Network! Connect yourselves! Join forces and let’s fight together against the ills of our society. We can and must drive the mobility transition ourselves!

Danni remains! They may be able to take away our physical space, but never the energy that created it. The forest lives on in us and all the wonderful people and visionaries here will continue to defend our planet with their heart and soul against the destructive madness of the big corporations and against politics controlled by capital interest. The days are getting longer, a new year has begun and just as nature comes to life anew in spring, the climate movement will also flourish in Germany and worldwide. New system-critical movements and mass protests will arise to defend nature and its habitats. We will not stop fighting for a climate-just world!

Danni lives! With our ideas and visions we create a better world. Together

we can realise our utopia!

Ideas for actions (whether from the sofa, in the forest or on the street) can be found here:

Thanks for the pictures! @pressmarcel 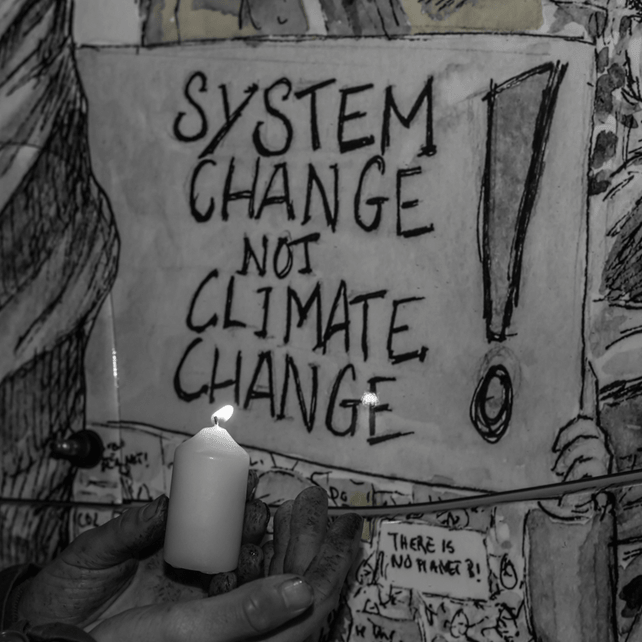 2 Responses to Where do we go from here? – A report from the Danni protest camp