Do We Have a Forest? The Need to Diversify our Tactics

Posted on 4. December 2020 by waldstattasphalt

Disclaimer: We found this article on de.indymedia.org (https://de.indymedia.org/node/122141)The publication of this article was decided by one person/some people and not by the whole occupation. There is no authorised group and no official body that could decide upon an ‘official’ group statement for the occupation. The people in the occupation and in their immediate environment have diverse and controversial opinions. This diversity of different stances is therefore not censored here, but differing opinions can be equally valid and have an equal right to be seen and heard. No text will speak for the whole occupation or is necessarily approved by everyone participating in the occupation.

Currently in Mittelhessen we are losing forested areas and are quite understandably upset and angry. 6 weeks ago the cutting started and already the track of the proposed highway has cut kilometres through 2 forests and now attacks where the main occupation, Danni is. Those people here to safeguard this habitat have been putting their lives in danger, in situations in which cops cut ropes which secure them and have fallen metres to the ground, they have been beaten off of machines and some tortured in custody (Gesa). Let us remind that the police is an apparatus of the state invented to protect private property, and this is what many of us here at Danni are fundamentally against. We are here rather for the common good, clean water, air, natural ecosystems, community, shelter. To own something is to take care of it, what the state rather does is take possession to control and we oppose. We write this article in order to clearly communicate the means necessary to arrive at the ultimate goal of forests that stay and regenerate, and a highway project that gets composted into a tale of a nonsense that could have happened.

[This analysis of the situation in the Dannenröder Wald Occupation was written on 20. November. Due to the overwhelming stress of the still ongoing eviction, it took until now to publish it. It remains as relevant as lessons to learn from Danni, and from the effects of police violence and oppression in general.] 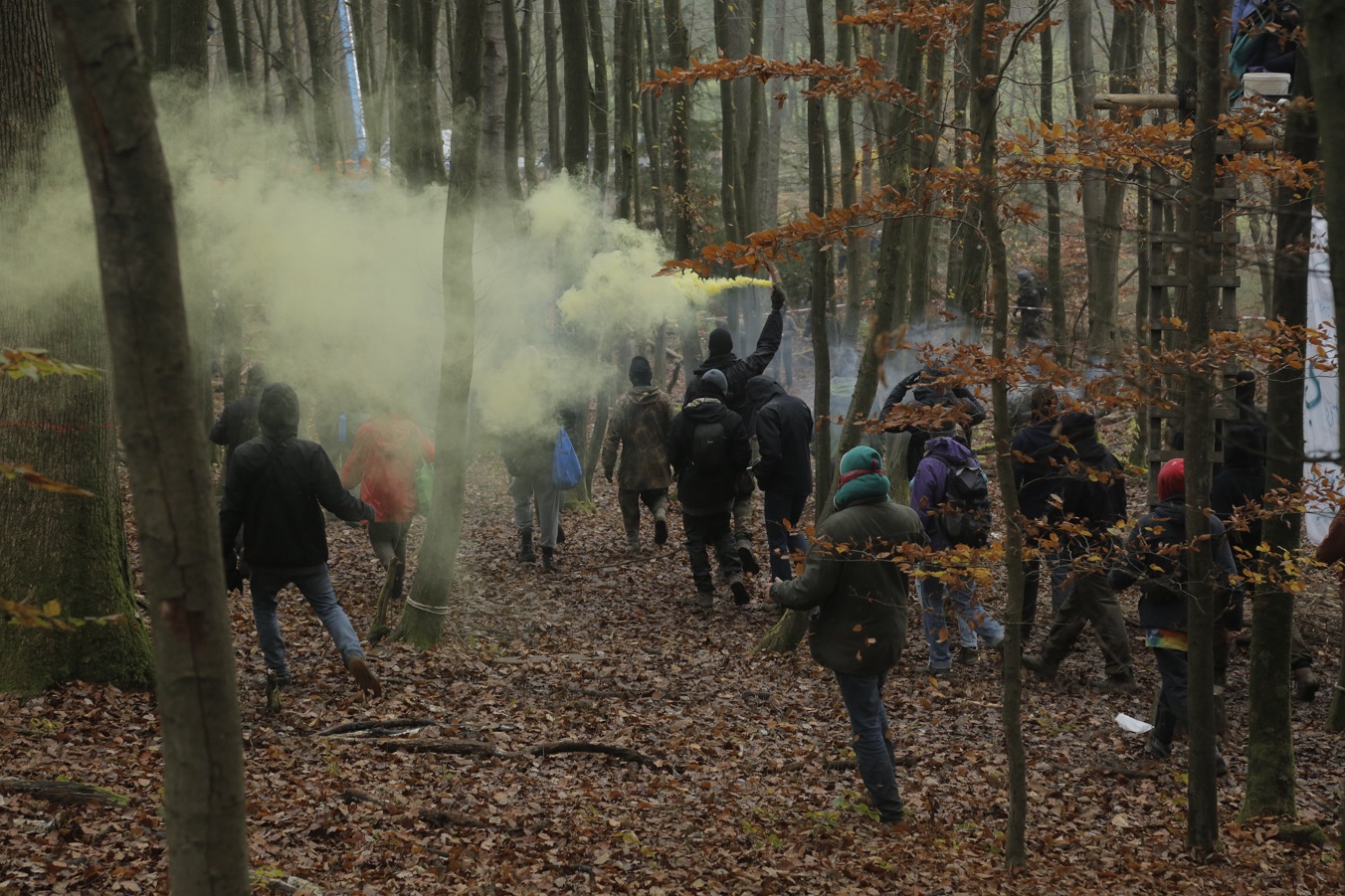 We can first do away with the dichotomy of violence and non-violence, there are degrees of violence which escalate and deescalate depending on the situation. These authors can only speak as a part of a larger movement, and by consensus with affinites we can find what is appropriate to work towards that ultimate goal or common vision. It is up to each of us to find the comfortable point of challenge with the risks we are willing to take in order to get what we want.

As the classic saying goes, „united we stand, divided we fall“ and so it is our wish to have each others’ tactics respected in that which leads to the ending of ecocide here and everywhere.

It comes down to willingness and ability to do what feels right to us, what our minds, bodies and emotions say a clear yes to. For some that might be sitting in a tree, as to be evicted and thus slowing down the cutting, decisions to safeguard nature possibly culminate in the meantime, for others appropriacy may be telling stories of the wonders of this forest and thus inspiring others to defend it, for those taking more risks, up against a highly violent punishment and reward based system, it could be throwing objects. We define this state as violent because by using the fear of punishment it quite obviously seeks to control us for its own benefit, instead of leading our lives the way we wish. It is also important to mention that these police people are so geared up with helmets and protective clothing that a stone hit is very unlikely to do any physical damage.

Yes we hate the police, we want to materially and imaterially annihilate policing, as they have hurt us and our loved ones with their violations; but our common intention is not revenge, it is rather to wake them the *#!< up, killing wildlife for monetary profit is NOT ok. If police officers experience flat tyres, or forest workers, destroyed machinery, and subsequently bring their lives more into question, what are they here for? Are they really on the path to happiness? And could perhaps choose to find a more fulfilling job, or even stand in solidarity with us protesters as they did in Thailand in 2013, we are creating the change we wish to see in the world. This insidious system that degrades us can be seen as a Jenga tower, the more of us that pull ourselves out, the more likely it is to collapse, and like the ugly cowshed that was dismantled to build treehouses here, we can build our world anew.

The history books they gave us in school do not talk about the riots that brought about decolonisation with Gandhi´s protests in India, or the Black Panthers actions in the civil rights movement, or the Zapatistas that autonomously keep their land, or how in Rojava they fight their oppressors, the state does not want us to know it is not invincible. But the more we take apart a capitalist system that does not care for the earth and it´s people, the more we realise that this is a violence that liberates.

It is up to us to keep each other safe, blaming and shaming of actions that we all don´t agree with is what those that work against us want us to do in order to more easily defeat us. The antidote to this is to bring each other closer, know ours and other´s reasons for why we do what we do. Take each other´s best interests as a part of our own, think, speak and act in ways that support a victorious forest occupation.

Futher reading which may be of interest:

2 Responses to Do We Have a Forest? The Need to Diversify our Tactics